Blessed is the man…

The 1st Psalm of David begins with, “Blessed is the man who walks not in the counsel of the wicked, nor stands in the way of sinners, not sits in the seat of mockers, but his delight is in the law of the Lord and on this law, he meditates day and night, he is like a stream planted by streams of water, which yields it fruit in its season, whatever he does he prospers.” Occasionally, God allows you to be a part of seeing the truth of this Psalm played out in a way that the best words to describe it are words such as “beautiful” or “wonderful.” Such is the story of Eastland Community Outreach, Windows Etc. Cleaning Services and Demetrius Finley. In a day and time filled with so much negative news, especially regarding race relations, I thought I would share this story. 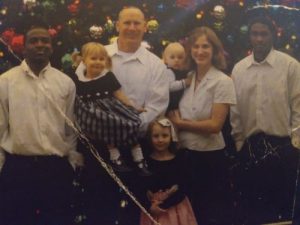 About 15 years ago, as my wife and I directed an urban youth ministry in Atlanta called Eastland Community Outreach, I believe the Lord laid it on my heart to found Windows Etc. Cleaning Services. I saw many of the young men in our group, most from fatherless homes, struggle to get jobs and keep them, and if they did, only jobs that did not pay very well. Because of this, I restructured my already existent residential cleaning business with the express purpose of training these young men to “work diligently with their hands” and to work with integrity. My strategy was to incorporate both specific job skills training alongside Christian discipleship to accomplish this goal.

Demetrius Finley was one of the first I brought on board. He came from a home without a father and he had been put out of his school. Honestly, the reason he was put out made me a little reluctant to welcome him but his cousin, who was a part of our ministry, had invited him and after all, that was what we were there for. After some time, Demetrius had shown himself faithful as he was willing to get up with me early in the morning three times a week along with another young man to work out, eat breakfast, and memorize large Bible passages.

Many times, we would work out at the old King Center, and I would stop in front of the statue of Dr. King and recite my dream to the civil rights leader. I can’t remember my exact words, but something like, “Dr. King, I have a dream too. I have a dream that these two young men would grow up to be such lights that they would give glory to God.” This dream was founded upon the words of Jesus, “Let your light shine before men so that they may see your good works and praise your Father in heaven.”

Except for a brief amount of time, Demetrius worked with me at Windows Etc. Cleaning Services for approximately 12 years. Some pastors preach from pulpits; my pulpit was the steering wheel of my work vehicle. I would have discussion after discussion with Demetrius as we drove to and from jobs, seeking to help him apply Christian principles to everyday life and encouraging him in the wonderful truths of the Christian faith, truths such as “we are more than conquerors through Christ Jesus who loved us.” Basically, every year the gross revenue for Windows Etc. went up and Demetrius’ salary went up. Together, I believe we lived out the truths of the 1st Psalm of King David quoted earlier. 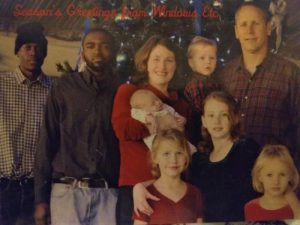 I believe part of our success was due to this mentoring relationship coupled with the fact that for many of those years Demetrius lived on our property and shared a lot of life as a part of our extended family. I love being reminded, as I look back at our annual family business photos we sent out to our customers at Christmas, that with each of those passing years, I grew spiritually, Demetrius grew spiritually, our business grew, and my family grew (I now have seven children). My beautiful wife and children (and I am not just talking externally) helped keep our love tanks full. We would need that love since life is never void of trials, many of them difficult.

Through the years, I kept encouraging Demetrius to get his driver’s license so that he could better move up the financial ladder. In the summer of 2018, we closed the business and planned to move back to Alabama. Before leaving, I tutored Demetrius so that he was able to pass the written exam on the first try to obtain his learner’s permit. Though I am generally a brave person, teaching him to drive in Atlanta was a little too scary for me.

When I secured a teaching position in the Phenix City area, in August of 2018, I encouraged Demetrius to move down with us for the primary goal of learning to drive in a much easier place. He was hired at Dunkin’ in neighboring Columbus, GA and I would pick him up from work most every evening and let him practice driving. I’d never taught someone to drive before so it was a learning experience for me also. Each time he would go for the driver’s test, the examiner would give us things to work on, and by the fourth try he received his license.

When the teaching and coaching position did not work out for me and we made a move to Sylacauga, Demetrius decided to move back to Atlanta and stay with another great aunt, the sister of the great Aunt Carolyn who raised him. He immediately received a job at Dunkin’ in Atlanta and eventually saved enough money to buy a car. Now having both a driver’s license and transportation, my wife Sarah encouraged him to apply to work at Sunshine Window Cleaning, by far the largest and most prestigious company of its type in the Atlanta area. 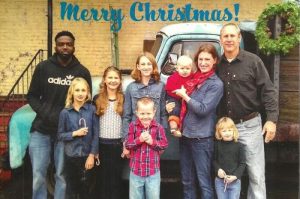 I believe I compensated Demetrius well, but given Sunshine had a 23-year head start on me in establishing their business, they were able to offer him even better compensation. As we continue to talk, it seems that Sunshine thinks very highly of him; he has worked with them for two years now, feels he is treated well and is receiving pay increases. Let us put the credit where the credit is due, though. His late great Aunt Carolyn instilled in him what I believe to be the greatest moral virtue – humility, which in turn yields teachability. That virtue made the role I played possible and successful.

But ultimately, it is God who sovereignly put it all together. Even the ministry my wife and I directed for so many years, Eastland Community Outreach, was founded in a way that is better explained by an act of God than mere coincidence. My partner in ministry, a man named Tim Brown, and I were serving together in a church plant in the West End of Atlanta so deeply infiltrated with drugs that the whole area was eventually bulldozed. When some of the youth of the community moved to an apartment complex on the East side of town, Tim would go and pick them up every week. There were so many youth who wanted to come that Tim began to pray that the Lord would provide an apartment in that complex where we could minister to those youth and children.

After two months of praying, Tim finally asked the apartment complex manager if the owner could provide an apartment for us. She responded, “You are not going to believe this but just two days ago, the owner of the complex told me to go out and find a church that would come in and work with our youth.” Interestingly, the owner of the complex was a Muslim. For the next five years, an apartment was provided free of charge for our ministry. Eventually, Sarah and I bought a home for our family close by and our ministry moved there and continued for several more years.

If you are not a person of faith at present, may this story lead you more in that direction. May it deepen all our faith in the goodness of a God who orders the affairs of men: Tim Brown; the apartment complex owner; Eastland Community Outreach; the vision He gave me with Windows Etc. Cleaning Services; Demetrius and his Aunt Carolyn; my family; and now Sunshine Window Cleaning. To God be the glory, great things has He done!